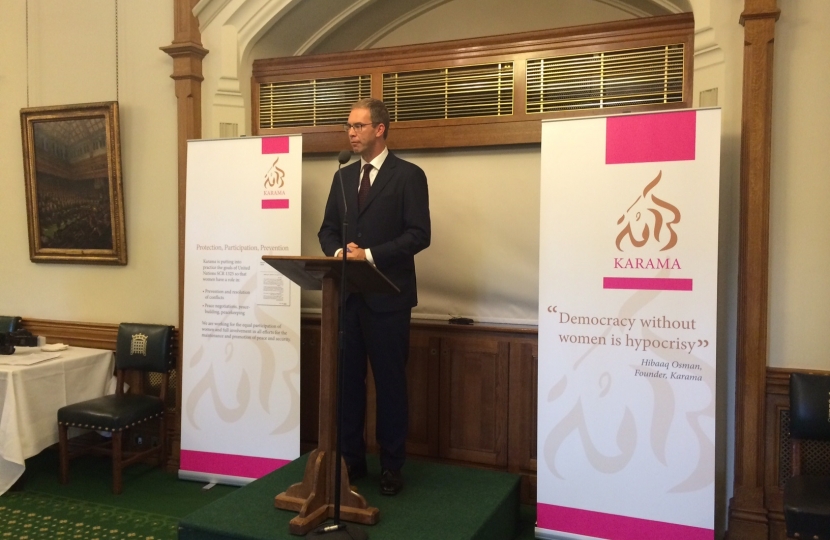 Today, I had the pleasure of chairing and supporting an event in Parliament with Karama, an international organisation working to promote women’s rights globally.

Working across the Middle East and North Africa, and in collaboration with the UK Parliament and other Governments, Karama works tirelessly to end violence against women, support progression on women’s rights and issues, and promote their full and equal participation in policy making.

The event featured delegates from some of the regions Karama operates in, sharing stories from countries including Syria, Libya and Egypt, as well as contributions from vocal supporters within the British Parliament including Baroness Warsi who has campaigned tirelessly to improve women’s rights.

Karama is an incredibly valuable and important organisation, hoping to bring women not just to the policy table, but give them the confidence to truly contribute to the debate and to make a difference to prospects for women in the Middle East and North Africa.

This event precedes three days of policy discussion this week at the ExCel Centre in London on international women’s issues, the first conference of its kind in the UK, and forms part of a wider initiative within the UK Government to tackle issues facing women worldwide. These include working to end the use of sexual violence in conflict (including the use of rape as a weapon of war), increasing powers of prosecution in the UK for those carrying out female genital mutilation, and new legislation announced in last week’s Queen’s Speech to tackle worrying increases in female trafficking and human slavery.

I was delighted to have the opportunity to support such an important cause and will continue to support these issues in Parliament.