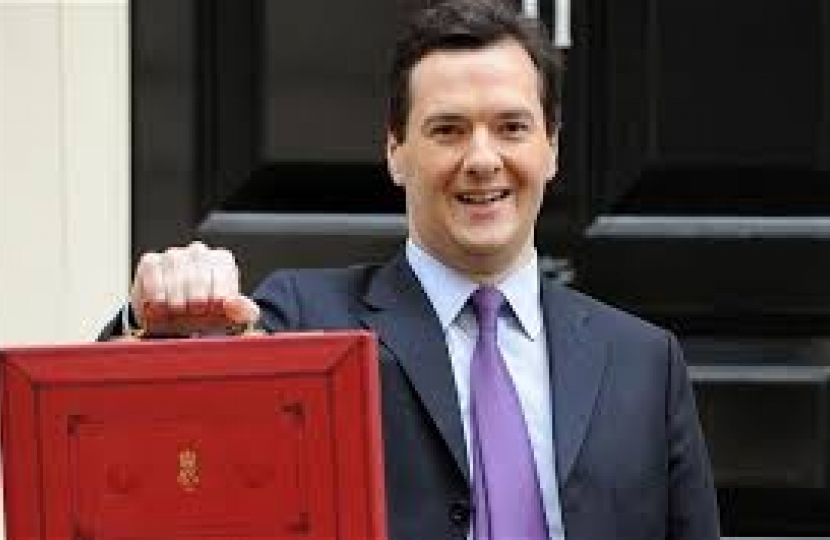 It’s in the days immediately after the budget speech - when the small print of the Red Book has been scrutinised that the full impact of the budget becomes apparent. And if the newspaper headlines, radio interviews and a very weak Opposition response are anything to go by, this Budget is standing up to scrutiny and is already being recognised as a significant statement of intent, building on this Government’s long-term economic plan of reducing the deficit, creating more jobs and making people more financially secure.

The Chancellor began his speech with a reminder of the scale of the economic mess we inherited, caused by banks lending funds they did not have, to people who could not afford it, in ways they did not understand. It has taken a new Government to completely reform the regulatory system and to introduce the necessary changes to make Britain competitive again.

Unlike the predictions from the Opposition, this is being achieved without any double or triple-dip recessions in sight.

The single biggest risk to our economic stability would be to abandon this plan and listen to Labour’s calls to borrow more, spend more and increase taxes. All the economic indicators suggest the Government's plan is working:

Firstly, employment figures: A record number of people are now in work, as reflected by the drop in unemployed claimants in Bournemouth which fell last month by 487 to 1,785, compared with a year ago.

Thirdly, inflation: this now sits at 1.9%, well within the range set by the Bank of England.

Fourthly, interest rates: set by the Bank of England, have been constantly low under this Government and are currently set at 0.5%. This means the cost of borrowing by individuals, banks and the Government is low. But, of course, low interest rates are not welcomed by savers, hence the important announcement to end compulsory annuities, making it cheaper and simpler for pensioners to draw down their savings.

Finally, the deficit: how much the Government must borrow to balance the books. The OBR predicts that the deficit will continue to fall. It's worth remembering that when Labour came into office in 1997, they inherited a sound economy. Up until 2002, the then Government made a surplus. Then the wheels came off, one by one. By 2004, the deficit was up to £33 billion, by 2008-09, it had increased to £69 billion, and in their final year of office, they had to borrow £156 billion to balance the books. Thankfully, a change in Government brought with it a new economic strategy and our deficit has reduced to £108 billion this year, which will drop to £95 billion next year. If we stick to this economic plan, the books will be balanced by 2018.

Of course, productivity, exports and savings figures are not what they should be, and this Budget addresses that. It has created greater incentives to save, with the ISA limit increase and the introduction of the new pensioner bond. The personal income tax allowance rise to £10,500 is also welcome, as are the larger and cheaper loans for companies seeking to export.

For Dorset there are the welcome announcements of a freeze on cider duty, reduction in bingo tax as well as additional funds for apprenticeships, pothole and flood repairs, and regional theatres and airports.

This Budget builds on the Government’s objective of securing the recovery and building a resilient economy. The job is not yet done, but the big question looming is whether we want to continue with a proven economic plan that is seeing Britain stand head and shoulders above any country in Europe, or risk returning to No. 10 the very team, the very people, who were responsible for the scale of the economic crisis in the first place.