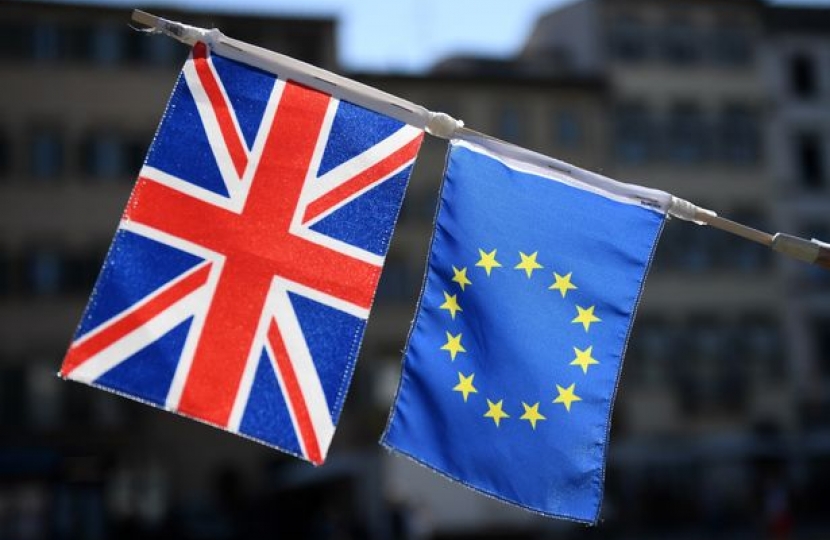 Thank you to all of those who have taken the time over the last few years to contact me regarding your thoughts and concerns surrounding Brexit.

I want to take this opportunity to reassure you all of a few things regarding Brexit negotiations.

The UK will leave the EU, including the Single Market and the Customs Union on 29 March 2019. As we leave the EU, free movement and the jurisdiction of the European Court of Justice will no longer apply and the days of sending vast sums of money to Brussels every year are over for good. We will also leave the Common Agriculture Policy and the Commons Fisheries Policy and we will once again be able to strike our own trade deals.

The Chequers agreement provides a commitment for the UK to maintain a common rule book on industrial goods and agricultural products so that we have a free trade area with the EU, but it will be Parliament that has a final say on any new rules or regulations. These rules have been relatively stable since the 1980s and the Government has always been clear that UK standards should be as high, if not higher, than those of the EU and so I believe that having a common rule book as a minimum is a reasonable proposal.

Having common rules on goods, as well as a new business friendly customs model, will also ensure that there is no hard border in Northern Ireland or any border down the Irish Sea and that the integrity of our precious United Kingdom is safeguarded.

The EU, in contrast, had effectively proposed to keep Northern Ireland in the Customs Union and parts of the Single Market. The Prime Minister had always been clear that such a move, damaging the integrity of the UK, was completely unacceptable. The EU's other option would have been for all of the UK to stay in the European Economic Area and the Customs Union, keeping free movement and accepting all EU laws. This was also unacceptable.

We want to be clear that the UK's vote to leave the EU was in no way a rejection of European values. The UK's dedication to ensuring the continued prosperity of the European people remains resolute and it is unconditionally committed to maintaining the security of the continent. The UK may be leaving the EU but it is not leaving Europe. The Government will always work with our international partners to defend democracy, human rights and the rule of law.

The UK and the EU have reached agreement on the first phase of negotiations on citizens' rights, Northern Ireland and the financial settlement. Agreement has also been reached on the implementation period, which means that talks are now focusing on the UK and the EU's future relationship.

The next few years will be a time of change for the country. I believe that we should come together and make the most of this opportunity. I want us to become a stronger and more outward looking country but we can only do so if we face the future with a common resolve.