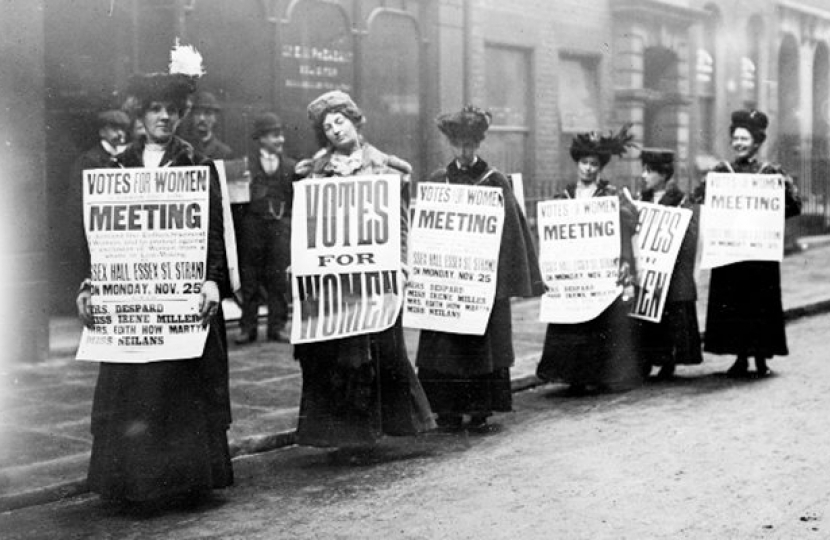 Yesterday marked an important centenary in British Politics. On February 6th 1918, the 1918 Act was passed after years of protest and debate for women’s suffrage. Many of you will remember the names of some notable suffragettes, such as Emmeline Pankhurst and of course Emily Davison who is most well-known for stepping in front of the King’s horse at the Epsom Derby in 1913, as being key members of the suffrage movement in the early half of the twentieth century. On this day, it is most important that we remember the efforts of these brave individuals, who defied the social and political stigma of their time so as their beliefs and opinions could be heard.

Today, I believe it is critical that women have an equal chance of getting to Parliament and the highest levels of Government. We are a better Parliament if we have the benefit of their skills, life experiences and their unique contribution, and it is our duty to ensure that the voice of half the population is equally represented. There are currently over 200 female MPs, and in the last 40 years alone the Conservative Party has produced 2 female Prime Ministers. It is my belief that our democracy is much stronger as a result.

But we must look to the future. Now more than ever, it is imperative that we engage people of all backgrounds, ages and gender in politics. That is why I actively support events such as Parliament Week, which explore what Parliament means to people and to their communities. Political belief is very personal and intimate thing, and it is important that people have the opportunity to express and discuss their political beliefs without fear of intimidation or stigma.

As ever, if you are a Bournemouth East Constituent and wish to share your views on this or any other matter, please feel free to contact me at:

If you are unsure as to who your local MP is, you can put your postcode in at the following web address to check: