The case for Two Aircraft carriers 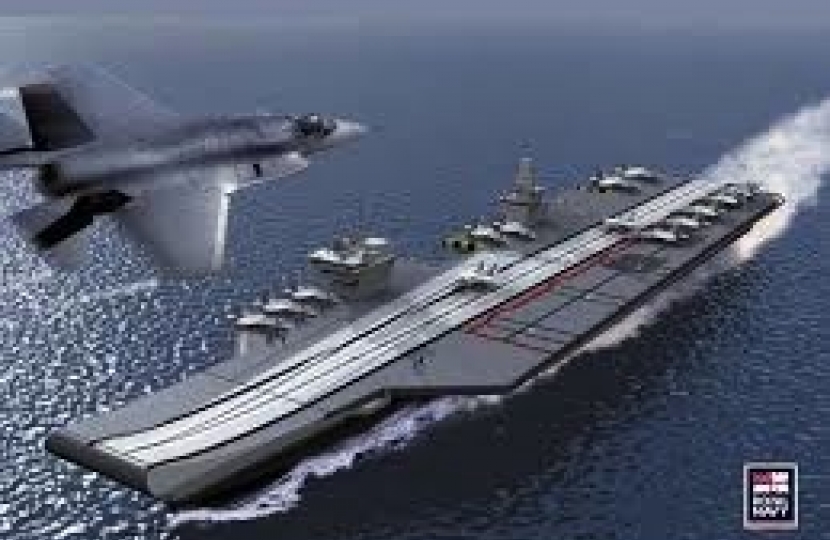 Tobias Ellwood MP argues in his RUSI Report that operating both the aircraft carriers currently being built would cement Britain’s position as ‘a global player with a military power of the first rank’ and also provide compelling operational and financial benefits.

Political parties (and successive governments) have been united in supporting the concept of aircraft carriers as part Britain’s defence mix but have differed on the detail. With two Queen Elizabeth Class (QEC) carriers now under construction, the question we face is do we operate two carriers or one and what balance of carrier strike and expeditionary assets should be included.

Sadly, almost from its inception, the debate about how these two ships will be utilised has been confused, even undignified. Mention the subject in Parliament and one is immediately drawn into the weeds about the type, performance, and cost of the aircraft that will finally replace our iconic Harrier.

Whilst optimised to deliver Carrier Strike, they can also function as a transportable maritime garrison and perform a variety of roles from Littoral Manoeuvre to crisis response/humanitarian tasks. Indeed in an age of reduced defence budgets this new size of ship, accompanied by the right assets, could set an international standard in how a versatile aircraft carrier of the future should operate.

Britain’s position as a global player with a military power of the first rank will differ depending on the number of carriers brought into operation, their availability, and how they are equipped, commanded and able to adapt from war fighting through to conflict prevention and peacekeeping roles.  This may seem a profound statement to make in the week Parliament voted against a punitive military strike in Syria, but these carriers will affect Britain’s status, influence, interdependence and vulnerability, not just immediately but over the next few decades where Government and Parliament may (through choice or obligation) opt to act very differently indeed.  The carriers will therefore play a lead role in tackling emerging threats and would also counter the demise of our historic qualitative and quantitative military advantage as the conduct of asymmetric war matures.

Of course, we cannot predict the future but we can ensure that, from an operational perspective the hardware, software and human resources incorporated into these ships have the built-in agility to adapt to evolving techniques, technology and likely tasks. Returning to the F-35B (STOVL variant) as the preferred choice of Joint Strike Fighter for the QEC will save money and ensure an earlier operational start date.  However, the impact on the carrier deck’s functionality, which service ‘owns’ the aircraft and the mix of aircraft (including unmanned aerial systems) used in the Littoral Manoeuvre role has yet to be determined and requires urgent examination.

Committing to the second carrier (at a cost of £65m a year) sends a powerful message of intent to potential adversaries (state and non-state) and also our allies, particularly the US, allowing us in turn to employ greater leverage on their own decision making.  It will elevate Britain’s ranking as Europe’s senior military power, allowing us to speak with more authority and indisputably lead the debate in both NATO and the EU on defence and security matters.

Operationally a second carrier would Guarantee a 24/7 carrier capability and provide additional versatility for example US carriers in the Indian Ocean provided 30% of the missions over Afghanistan. A single carrier would only be at sea two thirds of the year placing enormous demand to remain continuously in the carrier strike, rather than littoral/expeditionary mode. This was illustrated by the single French carrier which provided 40% of all allied air sorties during the Libya campaign until it was withdrawn for scheduled maintenance before the campaign was complete.

The limited availability of a single carrier would fail to justify the investment of 48 F35B. It would also prevent the Royal Marines from working up leading edge expeditionary skills using state of the art marinised equipment and transport. This cannot happen efficiently if their logistical air and ground support is reliant upon ‘borrowed’ green rotor capability, provided at short notice, with no time to train and for limited duration.

At 65,000 tonnes, the QEC carriers cannot be directly compared to the smaller US Wasp / America class (displacement is 45,000 tonnes) or the Nimitz/Ford class (100,000 tonnes) used by the US Marines and US Navy respectively.  Consequently, there is little precedent for how these British ships might function and thus, there is a rare opportunity to develop a new strategic maritime capability. This opportunity will only be harnessed if convention and prejudice are set aside and future technological possibilities are recognised.  Too often, familiar delivery platforms (fast jets) are over-emphasised, rather than considering what the final package (the Precision Guided Munition) is required to deliver. Why deploy an F35, to fire the storm shadow missile, for example (range 500km), if it could be launched from a Merlin helicopter or a marinised drone?

Following the billions of pounds already spent on its procurement and build, the annual running cost for a second carrier compare favourably to that of a British air base (for example RAF Marham: £144m) and is a relatively small price to pay for the degree of strategic  influence and operational capability it will bring.  Considering the number of engagements (both war fighting and peace keeping) Britain is likely to experience over the lifetime of these carriers, the net increase in  capability which a second carrier offers will more than pay for itself.

Leveraging UK Carrier Capability: A Study into the Preparation for and Use of the Queen Elizabeth-Class Carriers in full please visit www.rusi.org/downloads/assets/201309_OP_Leveraging_UK_Carrier_Capability.pdf