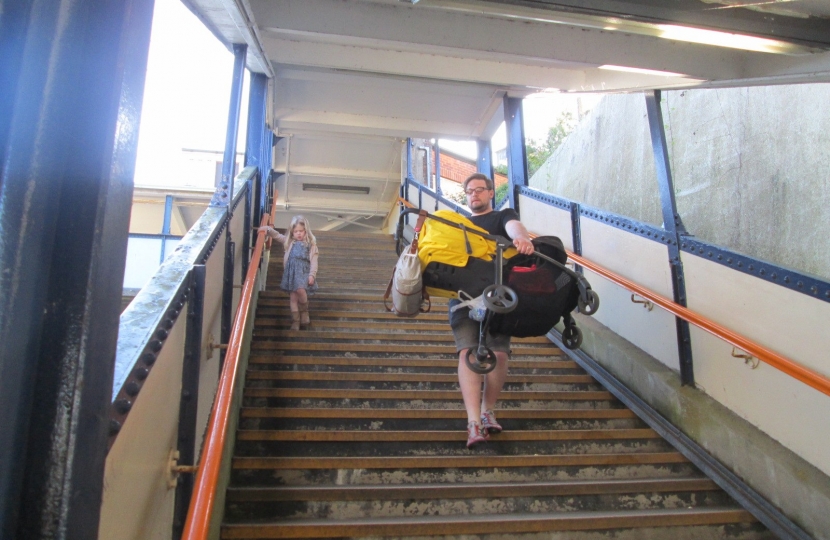 Tobias is calling for there to be proper disabled access at Pokesdown Station.  The lack of a lift make it difficult or impossible for may groups to access the station including the disabled, mum's with buggies, cyclists, elderly passengers with luggage who all have to do battle with the steps.

On 5th March 2015, Tobias Ellwood sent the following press release on this campaign:

Tobias Ellwood was delighted to meet with Baroness Kramer on Tuesday 3rd March – the Transport Minister for rail issues – to discuss the current access issues facing Pokesdown Station in Boscombe.

The meeting, originally agreed with previous Transport Minister Stephen Hammond before the reshuffle in July and then changed to the new Minister, allowed Tobias and campaigners to discuss the issues facing the station and look at how it could be improved in the future.

“I am delighted to have met with Transport Minister Baroness Kramer as well as other prominent local campaigners, to discuss the accessibility issues facing Pokesdown Station in Boscombe. Some interesting points were raised that I will be taking forward, including strengthening the current bid for funding to upgrade the station lifts, as well as further lobbying of South West Trains whom I am told would be the main organisation pushing for a Pokesdown station upgrade.

It was interesting to hear that out of around 2,500 stations in the UK, only 20% currently have adequate step-free access. As Pokesdown station is not in the top 20% in terms of the volume of passengers using the station, we know that our bid will need to be watertight in order to attract the support and funding that it needs to ensure improvement works can be carried out. I also plan to speak with local businesses to discuss other funding options, and hope to continue making progress on this issue in the near future.”

On 25th July 2014, Tobias Ellwood sent the following press release on this issue:

Tobias Ellwood, MP for Bournemouth East, yesterday personally delivered over 1,200 signatures to Downing Street calling for Pokesdown Station to be upgraded to provide access for all.

Tobias hopes that the station, which hasn’t had working lifts for 30 years, can be considered for funding under the Government’s Access for All scheme, which provides funds to stations in desperate need of upgrading.

"Yesterday, I handed in over 1,200 signatures to the Prime Minister at Number 10 Downing Street, calling for lift upgrades to Pokesdown Station. I hope that he will see from the vast number of signatures that local residents are passionate about making this station inclusive and accessible to all, from elderly and disabled users to young mothers with pushchairs.

I fully support this campaign and am continuing to liaise with Ministers at the Department for Transport to rearrange for the new Transport Minister to come down and visit the station in person."

Former Transport Minister Stephen Hammond was originally due to visit the station next Monday (28th July), but was moved from his position in the Department for Transport in the reshuffle. His replacement in this Transport role is Claire Perry, MP for Devizes.